Summer school on prosociality discusses risks of being social 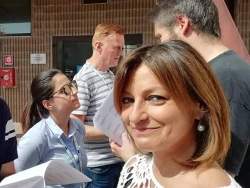 21 July 2019 - Last week, participants in the international summer school on prosociality in Città di Castello, Italy, discussed the limits of being “prosocial” in world that quickly seems to become more selfish and ruthless. It became clear the concept of “prosociality” is not jus an unproblematic ambition of teaching students to be nice to each other. True prosociality includes being free to be yourself, free to make choices even when the majority does not like it and being free from discrimination. This makes prosociality a politically sensitive topic, especially in countries where dictators and right-wing populists are actively using the argument of religious freedom to establish fundamentalist and totalitarian control of society.

The concept of prosociality

The summer school was part of an international European project (ALICE) that aims to introduce improvements in high schools to reach a better level of prosociality. Prosociality is defined by the project as people doing something for someone else, without expecting a direct return of the favor. This distinguishes prosocial behavior from general social behavior , that can also be based on selfish intentions. The ALICE-project further bases itself on the prosociality theory of the Canadian researcher Kristen Dunfield. She states that prosociality is not just being nice to each other, but that it can be distinguished in 3 distinct types of behavior: helping, sharing and comforting. For a variety of reasons, people don’t help, share or comfort each other. It may be that they don’t understand that others need it, or that they are unable to see the possibilities to do it, or that they are not motivated to be prosocial. Dunfield says students need to learn to understand the situations of need, to be helped to see the need so they are more willing to do something (motivation) and to be able to assess what they can realistically do.

In practice this is not so easy as it sounds. Research of the ALICE-project shows that being prosocial is easy in situations where the situation is unambiguous and when they are motivated. But in situations that are ambiguous, it becomes much more difficult to be prosocial. What do you do when your fellow students disapprove of comforting a friend whose father is in prison because of a crime? Or who is lesbian of transgender? How to teach about helping each other selflessly when the government makes it a crime to help drowning refugees? What does a teacher do when a teacher educates on non-discrimination prosociality and is reported for so-called leftist indoctrination on a right-wing populist website (Italy) or when the government adopts a law allowing students to film and report teachers who teach non-evangelical views (Brazil)? In societies where democracy, equality before the law and non-discrimination erodes, prosocial behavior becomes a provocation of the dominant totalitarian order and a dangerous thing to do. Many people will tend to avoid conflict and become silent bystanders of the social and political bullying.

The way the ALICE partnership deals with sensitive topics

The ALICE-partnership recognizes how sensitive prosociality can be. In the draft Prosociality Manual, there are numerous references to Maria Montessori and the more radical Danilo Dolci. Maria Montessori promoted education which links closely in the natural development of students and does not force them to learn in unnatural ways, like traditional school systems do. She also stressed the importance of social learning, including learning to know your own emotions and make own choices. Danilo Dolci went a step further by encouraging students and communities to take political action. He saw the school as a part of an inherent political society where communities, schools and students have to act, and saw the school as a place to learn such activism. At the same time, his activism was non-violent. He was sometimes called the Italian Gandhi.
But the ALICE-project also has partners in Italy and Greece, where the populist forces are strong. In Italy there is even a government adopting numerous laws that are contrary to the principle of prosociality. In Greece, objections where make to the diversity chapter in the Prosociality Manual because Greek students were deemed to not be ready to be informed about LGBTI issues. Of course, these tensions make it difficult to agree on to what extent we can implement prosociality together and in the same way. GALE is a partner in the ALICE-project and attempted to facilitate discussion on these tensions. However, although the participants touched upon these questions, for the moment they could not be solved. The participants appeared to be hesitant to discuss sensitivities in a too public way. It maybe they perceive the risks a too great. GALE concluded more work needs to be done to make sure the project does not become a bystander in bullying, discrimination and populist political blackmail.