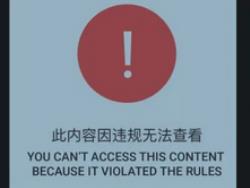 7 July 2021 - The Chinese tech giant WeChat social media platform deleted dozens of accounts of LGBT groups run by university students, as well as private accounts of students running the group accounts. According to WeChat the LGBT profiles had broken rules on internet information. Spreading positive information is forbidden by the public internet (censor) authority of China.

In 2017, China released a new regulation banning any display of “abnormal sexual behaviors” in online video and audio content, which included homosexuality. The regulation, published by the China Netcasting Services Association (CNSA), laid out strict censorship rules for online content ranging from movies and documentaries to cartoons and educational videos.
In early 2021 even more strict guidelines were issued. “Self-publishers” (bloggers) were forced to get an official license to publish about current affairs. This way, the government intended to increase control over critical voices and bloggers on controversial topics on social media.
The Cyberspace Administration of China recently pledged to clean up the internet to protect minors and crack down on social media groups deemed a "bad influence".

Forcing LGBT groups to shut down

The loyalty of LGBT university groups to the government and to the Communist Party was discussed in meeting in May between student groups and representatives of the Communist Youth League. Allegedly, LGBT student groups were asked if they were anti-Party or anti-China, and if they got funds from abroad. A student said they told the league that the group only worked on campus, but that the group still was forced to disband afterwards.
The shutting down of LGBT groups, which provide a strongly needed support for LGBT students, is likely to lead to unhappiness, depression, decreasing study results, and increasing drop out and suicide. The flat-out suppression of any freedom in China is not likely to lead to more support for the Communist Party.