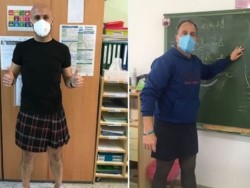 22 June 2021 - In May, male teachers from Spain in Euskadi wore skirts in school as a protest. In October 2020, a 15-year old student published a video in which he said he was kicked out of school and sent to a psychologist for wearing a skirt. The teachers wore the skirts to support the student.

The student said he wore the skirt to express solidarity with women’s liberation. He said he knew people would be surprised or shocked, but he didn’t expect to get pulled out of math class and taken to a psychologist. The psychologist questioned him on whether he is trans and identifies as a woman. When he said he was not, he was asked to wear pants and his parents punished him.

His video went viral and got over two million view on TikTok. It sparked nationwide protests in the week after it was published. Other boys in Spain started recording and publishing videos wearing skirts to class. The protests continued in some towns throughout the year, like in Bueu, where students decided to repeat the protest for gender equality on the fourth of every month since this November. And when the #laropanotienegénero (clothes don’t have gender) movement picked up in May, several male teachers also wore skirts to school. One teacher said: “20 years ago I suffered persecution and insults for my sexual orientation in the institute where I am now a teacher. Many teachers looked the other way. I want to join the cause of the student, Mikel, who has been expelled and sent to the psychologist for going to class with a skirt.” In at least one school in another region, the controversy led to the school management deciding to offer a course on gender.