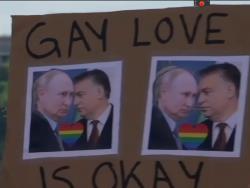 18 June 2021 - The Hungarian parliament has taken a new step towards marginalizing LGBTIQ people and to destroy the quality of education. They did this by adoption a new law that depends sharing content about homosexual orientation and sex reassignment with young people. The new law impacts educational programs, advertising and even popular television shows. As other countries have done more than a century ago, the Hungarian government links homosexuality with pedosexual seduction and rape.

The law is widely viewed by a political ploy of the ruling party Fidesz to gather support for its ultraconservative policies by taking away the attention from this and everything the attention to populist victim blaming of LGBT people. The law was initially drafted to increase penalties for pedophiles and supported by all parties; although like in most countries, the large majority of sexual child abuse in Hungary happens in heterosexual families by fathers, brothers and uncles. Fidesz added changes to the bill to include restrictions to content showing homosexuality and transgender people, which resulted in only Jobbik supporting the law. Opposition parties and organizations defending the rights of LGBT people deem the final bill homophobic. Human Rights Watch said Viktor Orban’s government has sought to scapegoat LGBT people as part of a wider strategy to sidestep human rights obligations and cement Orban’s brand of authoritarianism.

The new law states that homosexual orientation and sex reassignment cannot be part of sexuality education and schools cannot invite external speakers or NGOs for education on "sexual culture, sexual life, sexual orientation or sexual development" unless they receive a special licence by the state to do so. Participating in such activity without a licence is classified as a misdemeanour. This will make the LGBTIQ peer education groups in Hungary de facto illegal.
Homosexual orientation and sex reassignment will be qualified as category V (unsuitable for minors) in the media regulation. Publication of such content will be banned in public service advertisements. Media companies have stated that the law will ban films and soaps t like 'Billy Elliott', 'Philadelphia', 'Bridget Jones' Diary', or even some Harry Potter films to only late night showing. RTL said. "Series like 'Modern Family' would be banned, as would some episodes of 'Friends'."

More than 100,000 people signed an online petition calling for the law to be repealed. Demonstrations have taken place in front of the Hungarian Parliament building in Budapest in reaction to the law.
European Commission President Ursula von der Leyen personally issued a rare rebuke of Hungarian Prime Minister Viktor Orbán’s government on Wednesday, after the country’s parliament approved a law banning the portrayal of homosexuality to minors. “Very concerned about the new law in Hungary,” the Commission chief tweeted.

Possibilities to counteract the legislation

Before the can be adopted the President of Hungary must review and sign the bill when he deems it constitutional. If the bill is passed, Parliament may request a review of the legislation, or a petitioner may make a constitutional complaint. According to the Hungarian lawyer András Schiffer, the law may be unconstitutional based on some of the wording and loose definitions. He views the bill as a political ploy by Fidesz that is openly directed against LGBT people.
ILGA Europe called for the EU to hold Hungary accountable for the respect of fundamental rights. “No EU funds should be paid out to Hungary before the law is withdrawn.” ILGA said the law clearly breach EU laws international human rights norms, in particular the case law of the European Court of Human Rights, UN Human Rights Committee and the EU’s Charter of Fundamental Rights (Articles 11 and 21) and Treaty on the European Union (Articles 2 and 6). Ursula von der Leyen announced the EU is assessing if this law breaches relevant EU legislation. She said: “I believe in a Europe which embraces diversity, not one which hides it from our children.”