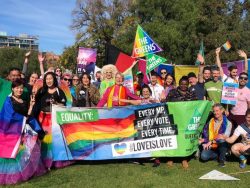 8 June 2021 - In a recent parliament debate in Australia, the government was reminded by senator Janet Rice that the government promised to produce legislation to forbid religious schools banning LGBT students three years ago. However, the government does not want to grant this protection now because “it is still considering the development of the Religious Discrimination Bill”.

An exemption to the Sex Discrimination Act

Section 21 of the Sex Discrimination Act states that under Australian law it is unlawful for an educational authority to discriminate against a person on the ground of the person’s sex, sexual orientation, gender identity, intersex status, marital or relationship status. However, section 38 of this Act, provides an exemption for religious schools.
The Attorney General’s Department responded to Ms. Rice that the matter was referred to the Australian Law Reform Commission, and that its inquiry has been put on hold while the Government’s Religious Discrimination Bill is developed and considered.

Petition to move against unfair treatment

Equality Australia has launched a petition to call upon political leaders across Australia to remove outdated carve-outs from anti-discrimination laws that allow students, teachers and staff to be expelled, fired, excluded or treated unfairly because of their sexual orientation or gender identity. The petition can be signed here.