Global attitudes towards LGBTIQ tend to polarize and deteriorate 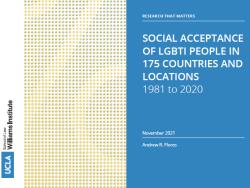 11 November 2021 - An updated report on the LGBTI Global Acceptance Index shows that attitudes worldwide tend to polarize for and against LGBTI rights. Although the number of countries becoming more supportive is still rising, the hateful countries are getting more hateful and the populations of more supportive countries tends to become less supportive.

Analysis based on 7 million responses

Using an advanced statistical model, the author updated the Global Acceptance Index to measure acceptance in 175 countries and geographic locations. Acceptance is the extent to which LGBTI people are seen in ways that are positive and inclusive, both with respect to an individual’s opinions about LGBTI people and with regard to an individual’s position on LGBTI policies.
Updates included an expanded database of social surveys that measure attitudes toward LGBTI people and rights, and addition of surveys on transgender and intersex rights.
The resulting dataset included 6,198 country-question-years (meaning results for a particular country in a particular year for a particular question) under analysis with 98 different question wordings, 175 different countries and locations, and 37 years. The combined individual-level sample involves 7,059,822 responses to questions relating to LGBTI people and rights.