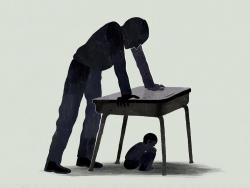 5 November 2020 - Governments around the world should urgently step up efforts to ensure students’ safety at school and in online spaces, Human Rights Watch said today on the first International Day against Violence and Bullying at School Including Cyberbullying. Many governments have not yet banned corporal punishment, and many lag behind on protecting students from school-related sexual violence, bullying, and online violence, including homophobic, transphobic and sexist bullying.

Half of all adolescents experience school bullying

According to United Nations agencies, more than 246 million children suffer gender-based violence in or around schools every year, and one in three students experiences bullying and physical violence. Half of the world’s adolescents report violence from peers at school.

Human Rights Watch research on barriers to education in over 15 countries found that children and young people experience many forms of school-related gender-based violence. Students often report corporal punishment, sexual exploitation, abuse and harassment, physical violence, and bullying. Teachers and school officials as well as other students are commonly responsible for these abuses. Corporal punishment in schools remains lawful in at least 67 countries, and many teachers still use corporal punishment to control classrooms and to exert their authority.

Girls, children with disabilities, refugee children, and lesbian, gay, bisexual and transgender (LGBT) students frequently experience high levels of violence and bullying. Violence against these children often receives little attention because of prevailing discriminatory and harmful attitudes that perpetuate silence and impunity. Sexual violence in schools, which includes rape, sexual abuse, and sexual exploitation, remains under-reported in many countries. In Senegal and Tanzania, teachers and school officials frequently sexually exploit girls in exchange for money for school fees, grades, and basic items like menstrual pads.
LGBT students face bullying, discrimination, and violence in many countries, but are often excluded from antibullying policies or measures taken to curb violence in schools. In many countries a lack of teacher training and accountability means that teachers both allow and contribute to bullying of LGBT students.
Cyberbullying also affects LGBT youth, with abuses moving from classrooms to online spaces. In the Philippines and the United States, LGBT students described anti-LGBT comments and slurs as well as rapidly spreading rumors facilitated by social media. This public exposure and ridicule has negative consequences for children’s mental health and academic achievement, Human Rights Watch has found.

Governments should urgently adopt binding national policies that guarantee students protection in schools and online spaces. Those that already have policies in place should ensure that they include protections for children particularly likely to face abuse, including girls, LGBT students, and children with disabilities.